Nuit Blanche Eve 2020, a partnership between Nuit Blanche Saskatoon and Shared Spaces, is now live. Links to download a test version of the app for iPhone or Android are below, and more detailed tutorials to install the test versions of the app follow. The app is still in the process of being built - this will be the first public test of the app - and as such we expect there may be some glitches while you are using it. On that note though, once you have tried the app we ask that you complete this short survey to help us refine for the next stage of development.

We have created a User Guide to support you in using the Shared Spaces app, this guide is intended to help even those who have never used AR before to view and enjoy this year's digital version of Nuit Blanche Eve.

Nuit Blanche Eve 2020 is the first public event for Shared Spaces. Normally featuring artwork created by USask students installed throughout campus and held the evening before the main festival, Nuit Blanche Eve has moved online this year. Lisa Birke and Nuit Blanche Saskatoon Curator Lydia Miliokas have worked with 10 USask students to develop 3D sculptures, videos, and other AR artworks that are being presented through the Shared Spaces app. Information about the artists and their artworks is below.

This is the first of three stages of development for the Shared Spaces app. For this first stage, we have built an Augmented Reality (AR) viewer that can present 3D sculptures, green screen videos, animations, and other digital artworks. In the second stage of development (which will start following feedback from this user test), we plan to build in additional experiences - such as interviews with artists - that can be triggered by physical artworks or added to AR artworks, as well as tutorials on how to build and add your own artworks to the app. In this second stage will also build a database so artists can create a profile and add their artworks directly - currently our development team is doing this. In the final phase (the second half of 2021), we will build a 3D environment so artists can create their own online exhibitions. The full app is scheduled to launch January 2022. 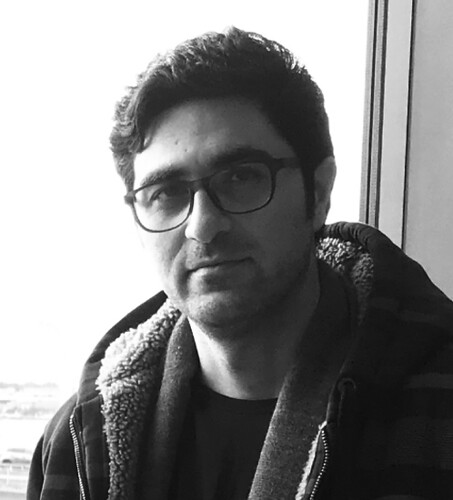 Mohsen Ahi Andy is a multi-disciplinary artist working in the intersections of sculpture, installation, digital media and, currently pursuing his Master of Fine Arts degree at the University of Saskatchewan.

“Delve inside” is a short animation representing the abstract beauty of the universe and the outside world using and manipulating documented photos by space telescope through digital means. 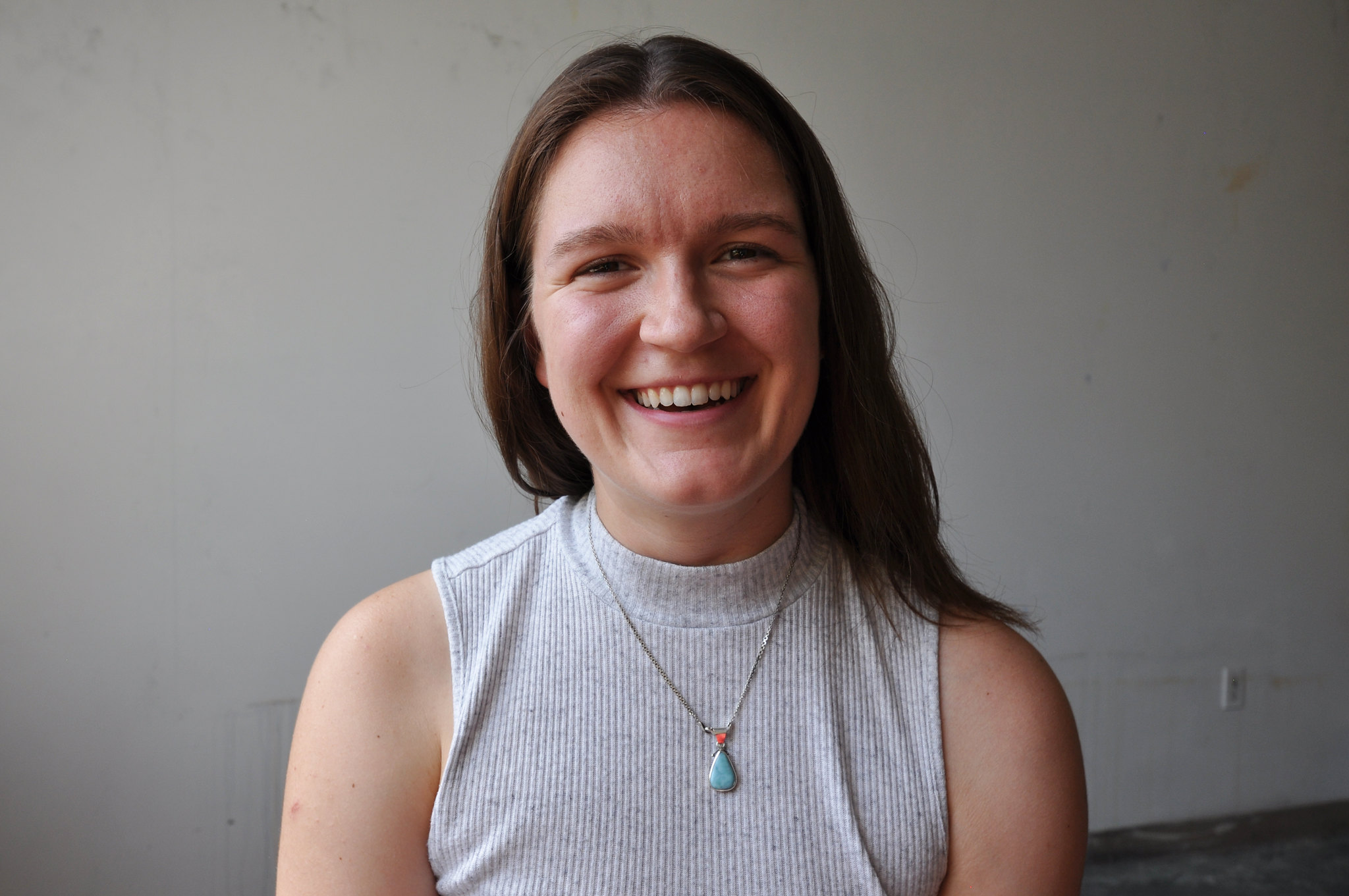 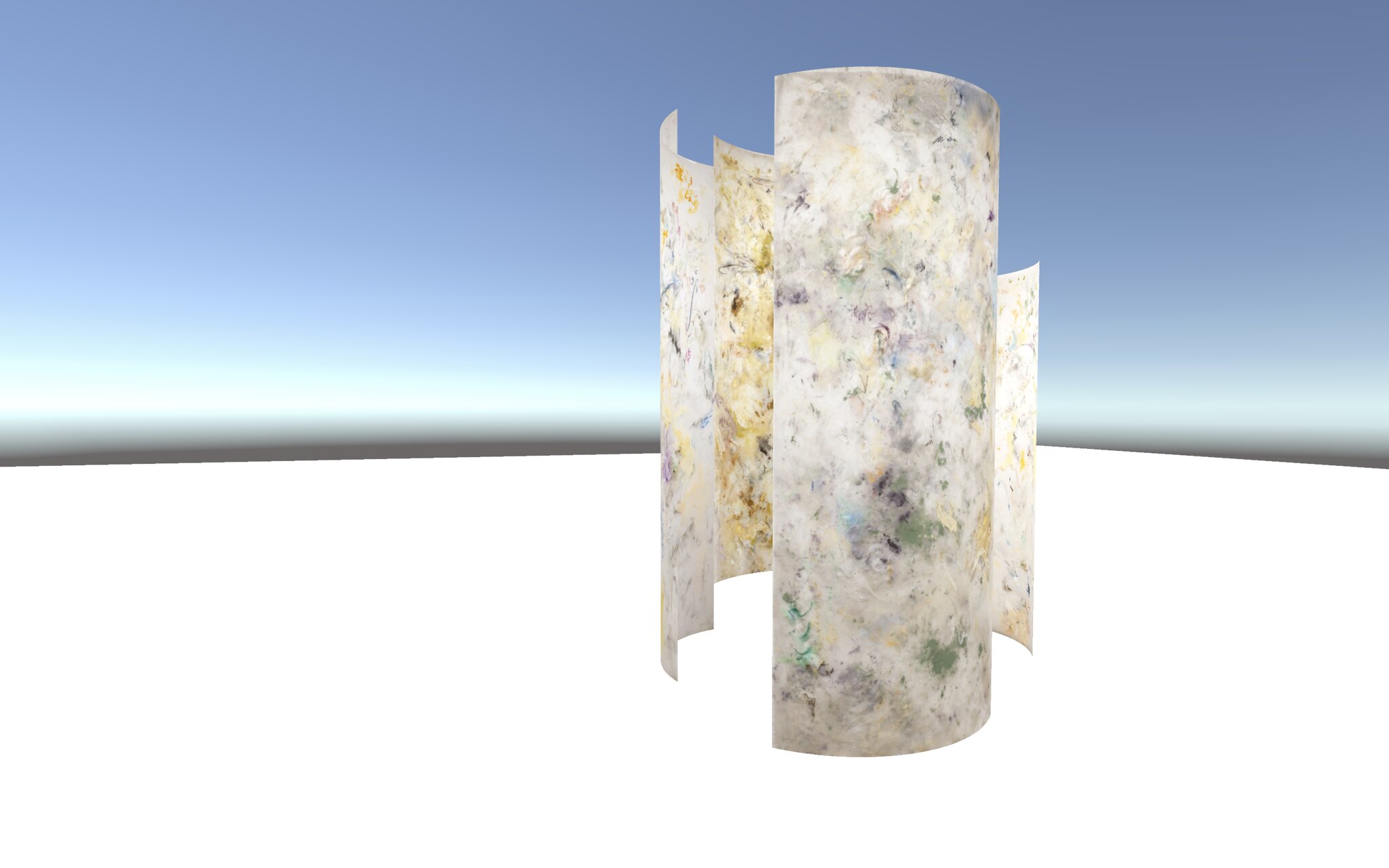 Breanne Bandur is an artist currently based in Saskatoon, pursuing her MFA at the University of Saskatchewan. Through an embodied drawing practice, she considers the act of mark making as it relates to ideas of being and ways of knowing.

Breanne’s drawing installation, “In-Between Places,” is composed of four brightly-coloured, gestural drawings. These drawn panels are installed in an irregular, circular-like arrangement, creating implied pathways; they suggest the immersive while remaining out of reach. Through these ideas of presence and absence, “In-Between Places” considers the inherent interconnectedness of opposing parts that make up a whole.

“In-Between Places” has been made possible thanks to the support of AKA Artist-Run and its leadership, who generously provided their gallery space for the production of this work. 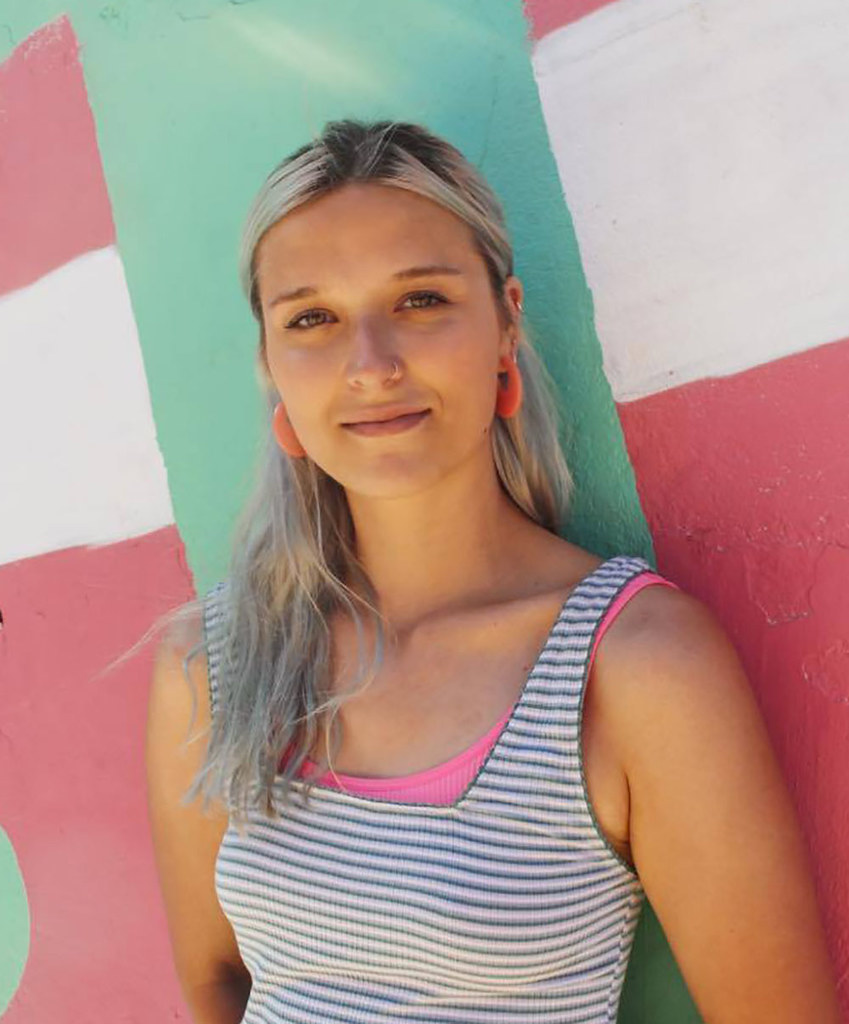 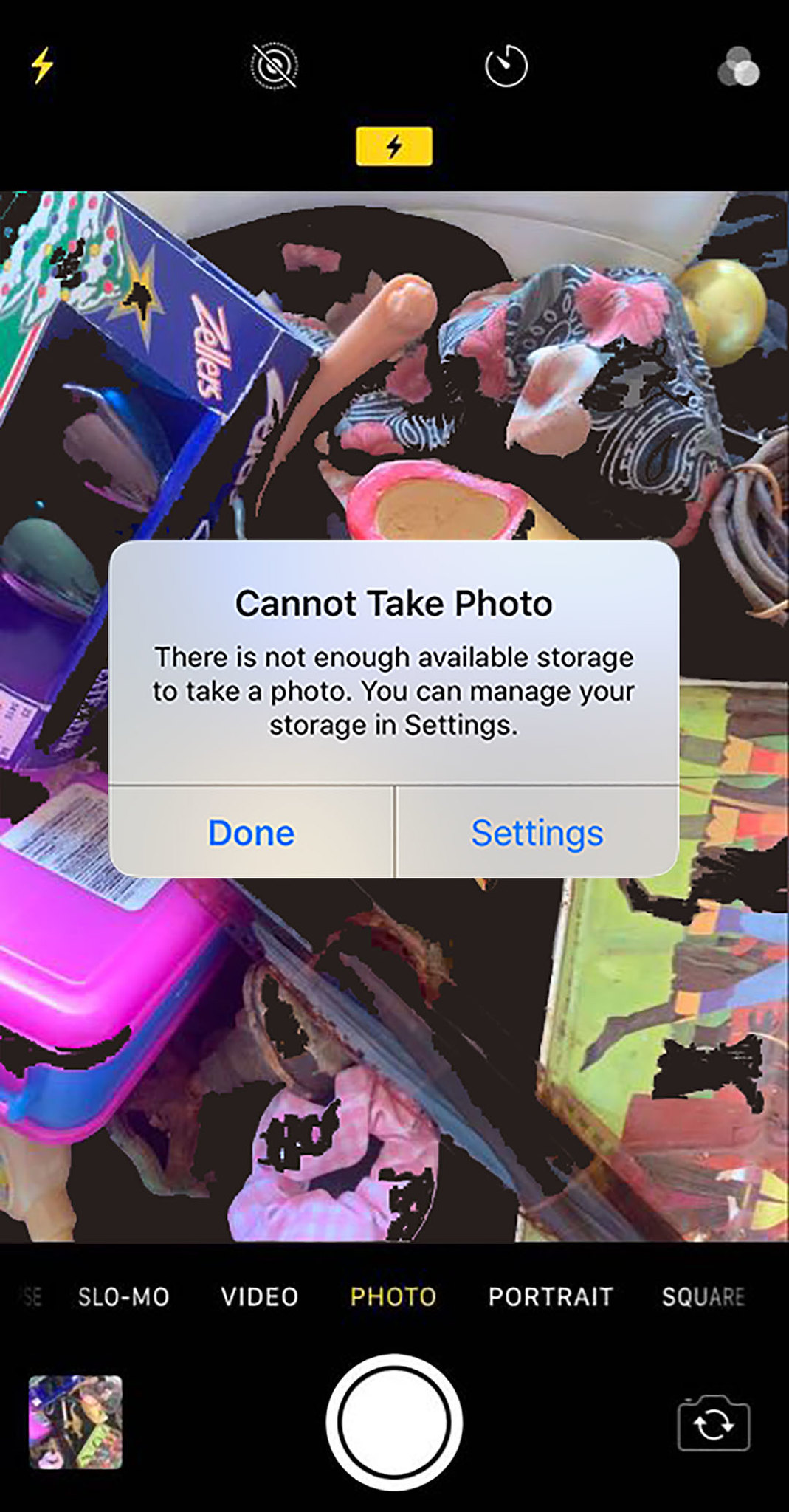 Emily Johnson is a visual artist based in Saskatoon, Saskatchewan, Canada. She received a Bachelor of Fine Arts in Studio Art from the University of Saskatchewan in 2020. Her primary focus has been in the field of sculpture and installation. Much of Emily’s recent artwork uses found objects to explore their values as collections with which we choose to surround ourselves.

Is the new age of hoarding defined by an individual’s immense collecting of digital data in the Cloud? "Clutter Cloud" is a 3D augmented reality sculpture that uses both unique and mundane found objects from the real world to build a visual representation of the virtual decay of the forgotten masses of digital junk, such as selfies, screenshots, old documents, and endless photos of sunsets. This sculpture also acts as an interactive eye-spy activity where participants are invited to locate specific objects within the “pile.” This act of searching is intended to be a reminder of what lies amongst the lost data cluttering the Cloud; however, a Google search will be of no help in this case. 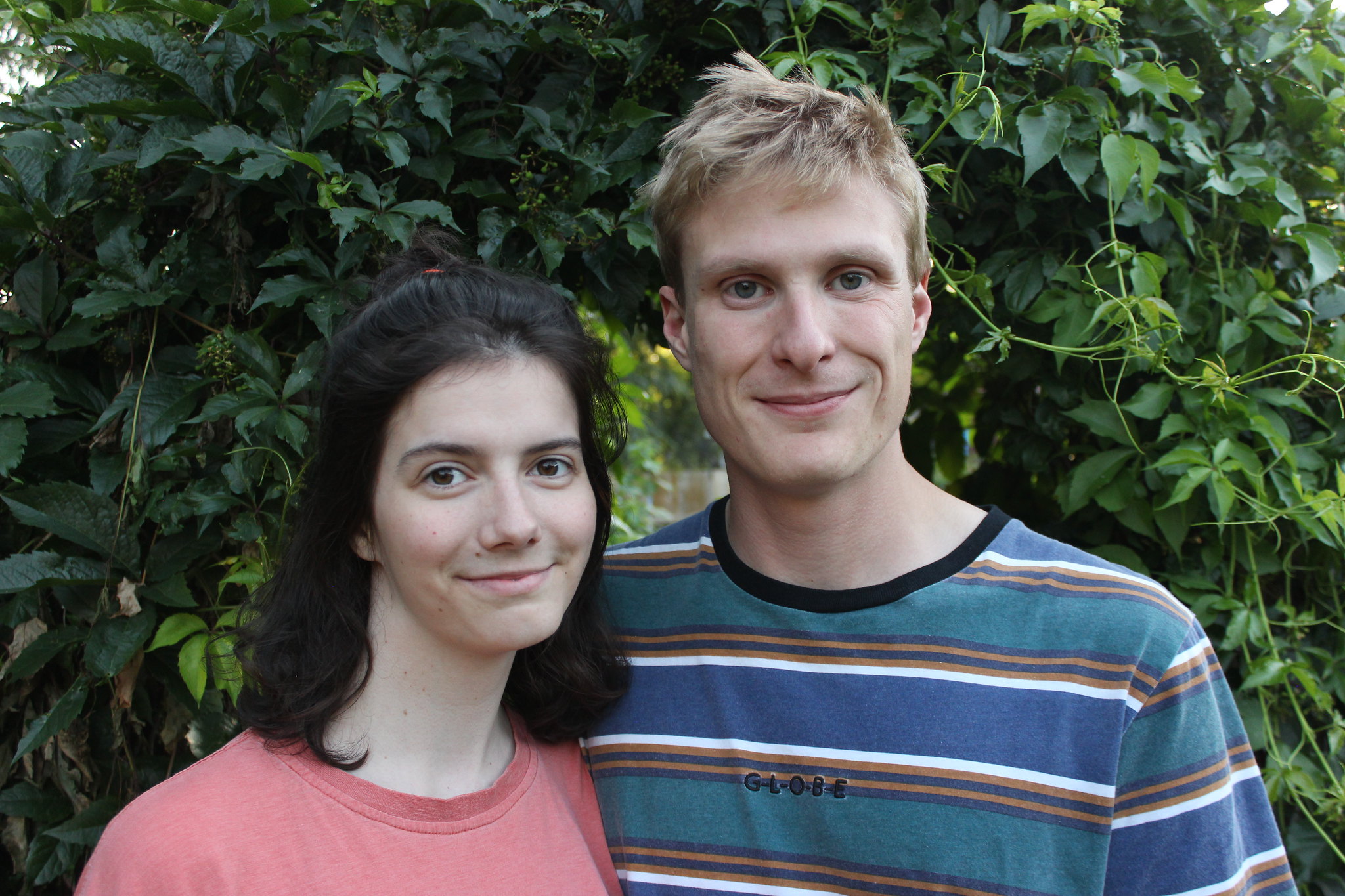 Both Kurt Wolfe and Jenna Kachur are students of the University of Saskatchewan. Kurt is studying Psychology, and Jenna is a recent graduate from the University of Saskatchewan with a BComm. Jenna has a background in film, photography, and video editing, while Kurt's is in music and film. They are excited to merge their passions for this project and create something on an accessible digital platform. 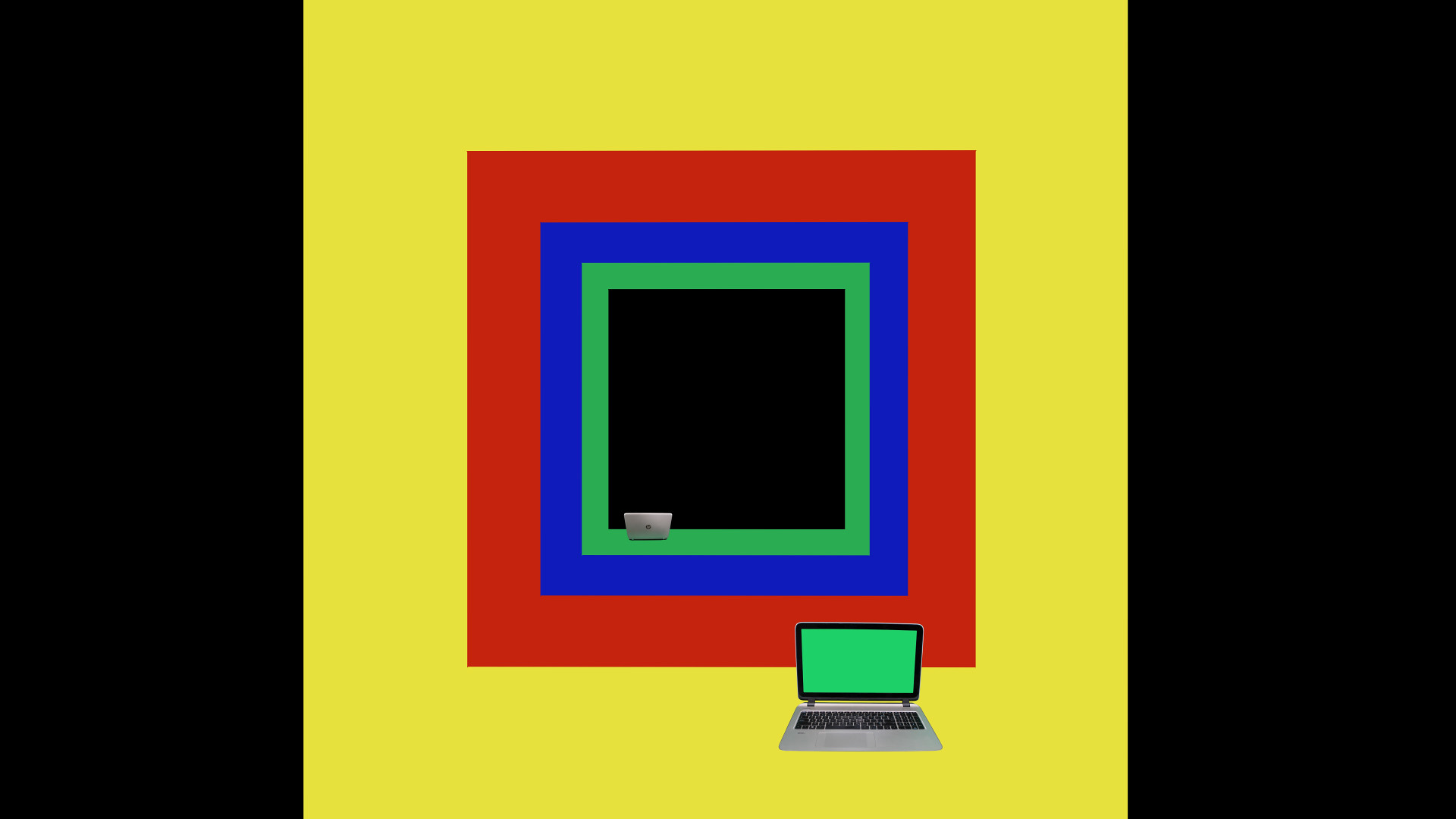 "These Four Walls" is influenced by the current global situation. As people are shut in their homes and their environment doesn't change, one's perspective is still malleable. This piece seeks to capture the feelings evoked by changes, both familiar and unfamiliar, that the world has collectively experienced in this past year. While many shifts have occurred on a collective scale, the implications of these shifts have meant something different for each person; as familiar environments become foreign, comfort is found in novel situations. With a lock down in effect, many have looked at the same four walls…for months. "These Four Walls" challenges the monotony of quarantine. The morphing and looping effects of the piece illustrate the illusion of time slipping, though days stay the same. 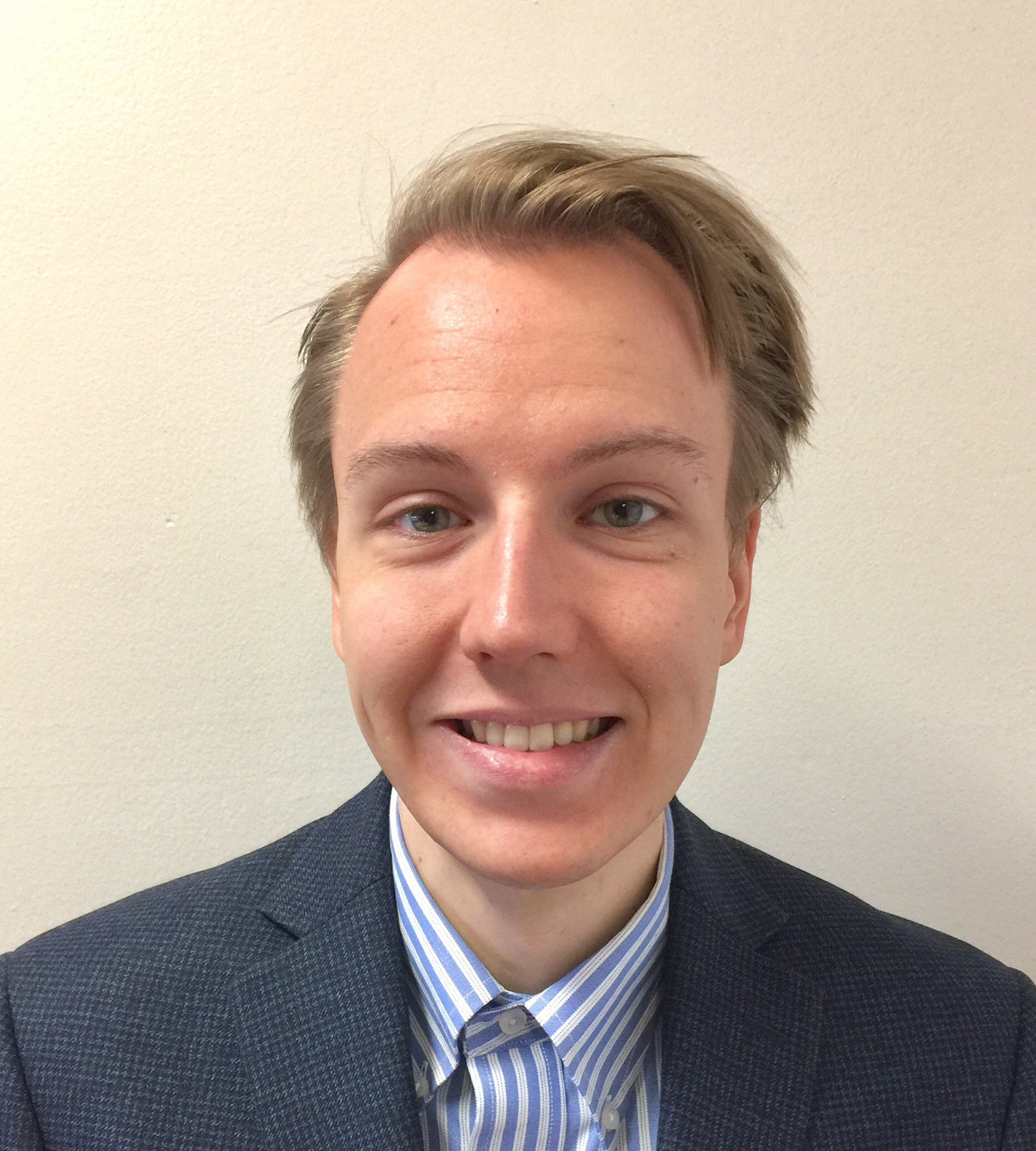 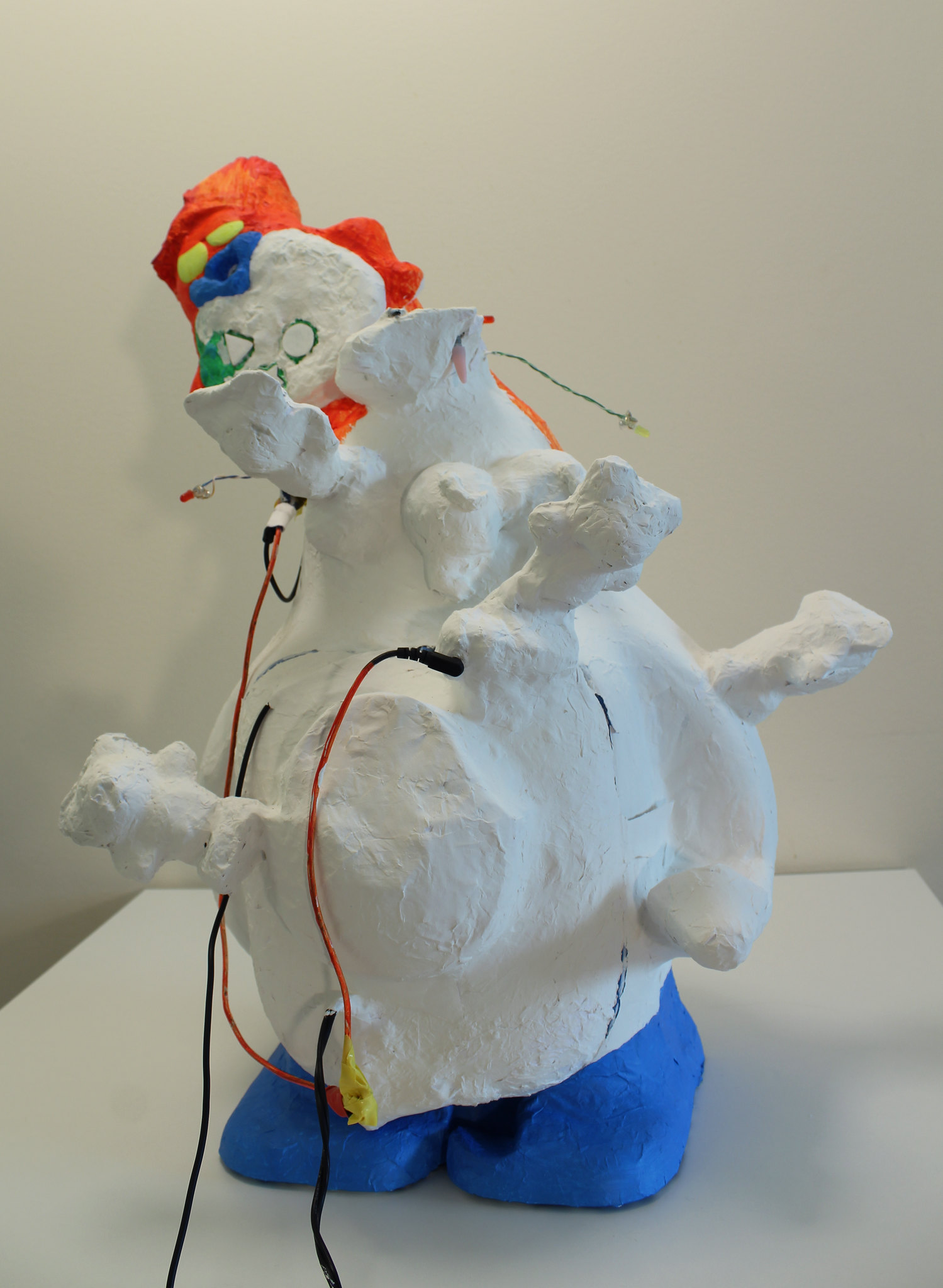 Nicole Leroy is a French-born American artist, whose practice and research focus on commercial culture. Nicole's work predominantly incorporates found objects and children’s entertainment media, which form multimedia electronic sculptures. Reinforcing this practice, his research revolves around visual and popular culture, as well as the autonomy of readily-available consumer objects.

"Octuplets" is a multimedia electronic sculpture that produces distorted sounds and corresponding flashes of light. The sculpture is a singular entity, comprised of seven small individual creatures that are fused to a much larger one. Together, they function as a single organism, yet they each express their own personality and individuality. In an overt, physical way, the work celebrates the power of collaboration and the value of self-expression, all the while utilizing the broadly familiar language of cartooning and the eccentric mythology of science fiction. 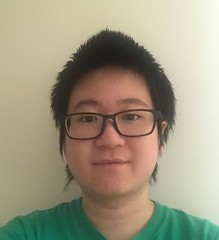 Qihang Liang has an interest in computer science and computational arts that led him to pursue a Bachelor of Arts and Science degree in Interactive System Design at the University of Saskatchewan. Qihang likes to explore the boundaries between digital space and reality.

“The purpose of life” tells a story by using ‘time’ as the driving force of the narrative. The work shows how a person develops from the innocence of childhood but then gradually decays and becomes a robot to adapt to society. By the time the person recognizes the situation, age has already withered him and he no longer has enough energy to pursue his dreams and aspirations. When people realize the importance of ‘family’, their children have already reached the age where they begin their own journeys, just as their parents did when they were young. The fall at the end of the animation is the turning point of the project; it reintroduces pivotal moments in the main character’s life in sequence, seen in the rooms of the apartment as the character falls past the windows. It is at this moment that the subject discovers that his family was always around during the most difficult moments of his life. 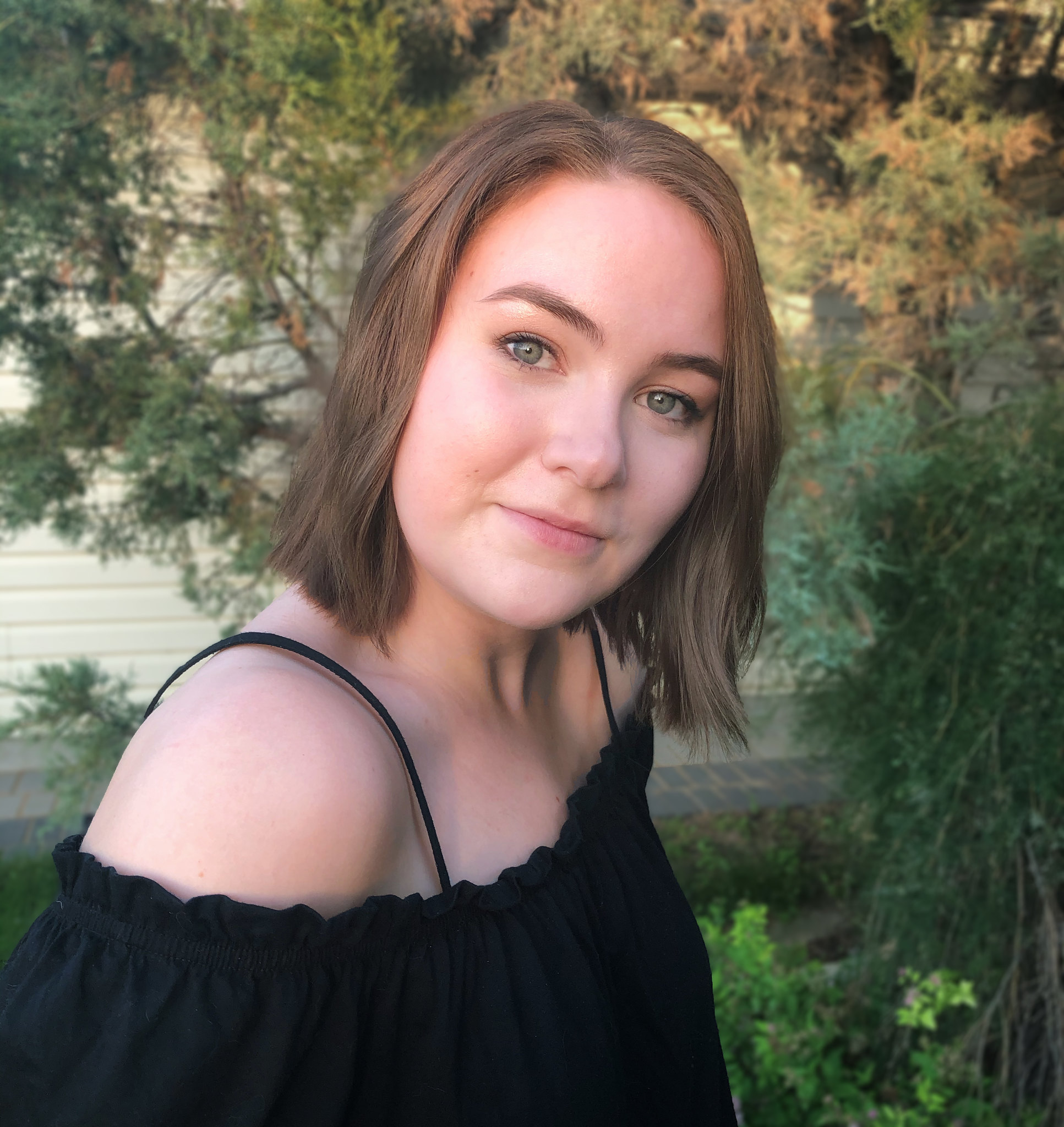 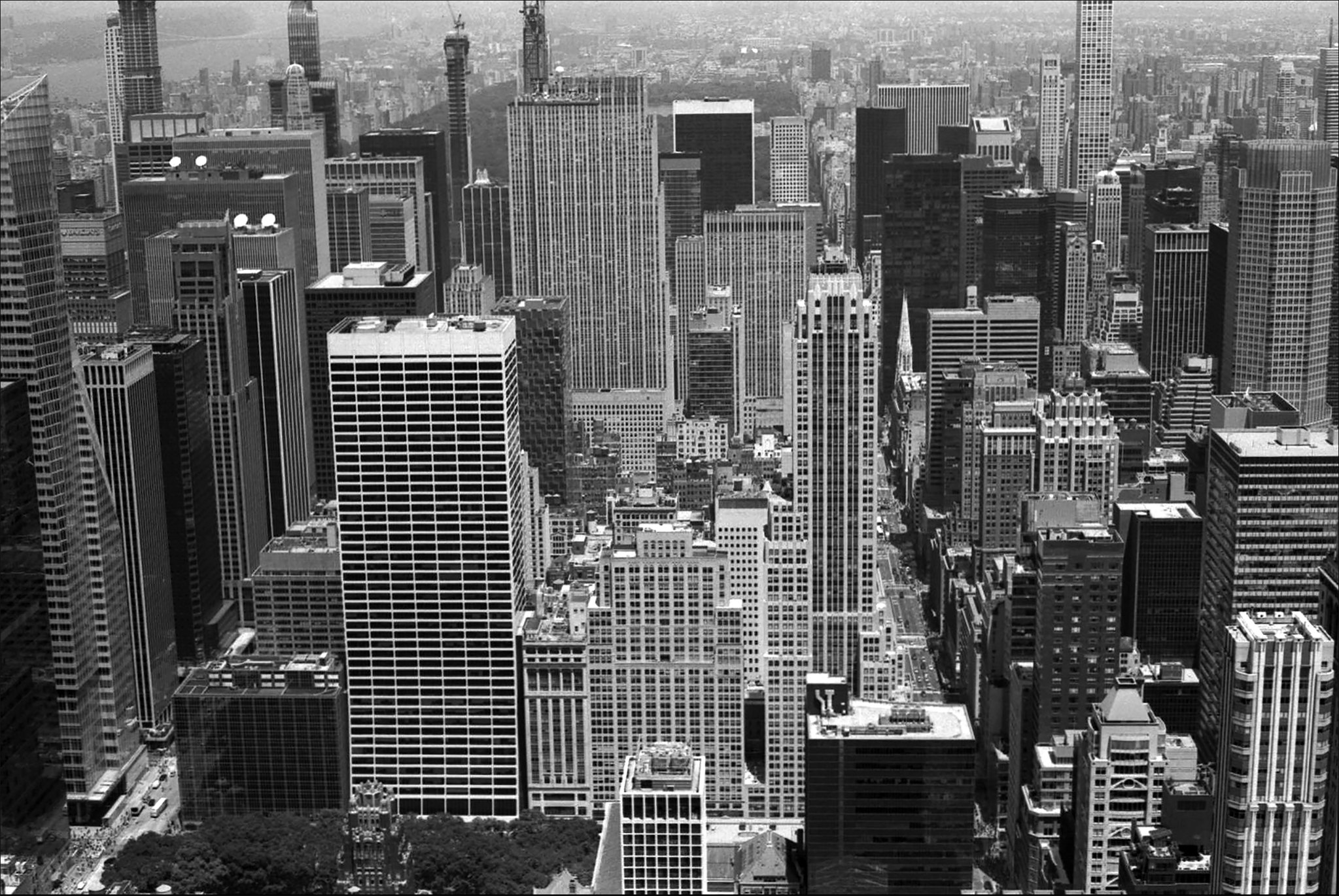 Emilie Neudorf has an interest in social justice issues and the arts that led her to study both sociology and studio art in a double major bachelor's degree at the University of Saskatchewan. These two fields of study reciprocate inspiration for sociological research topics and artistic subjects.

"Spread" is a collaborative stop motion animation made possible by the generous contributions of many virtual participants. The background image in this animation was sent out to participants who took photos of it displayed on computers in their homes. The variation of lighting, focus, and reflections in these photos create echoes of the spaces they were displayed in. Collaboration is one thing that’s welcome to spread through hundreds of homes in our community. 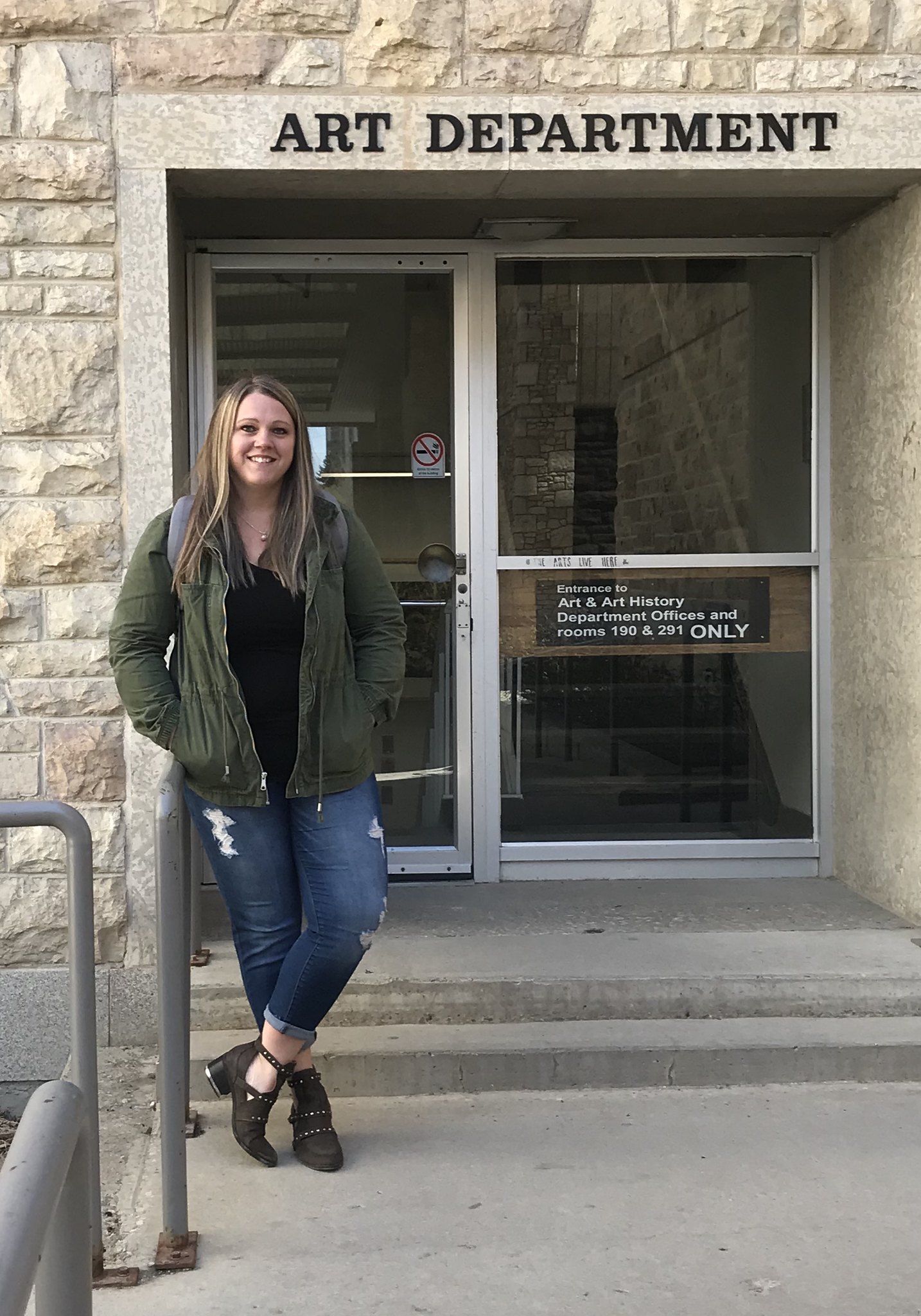 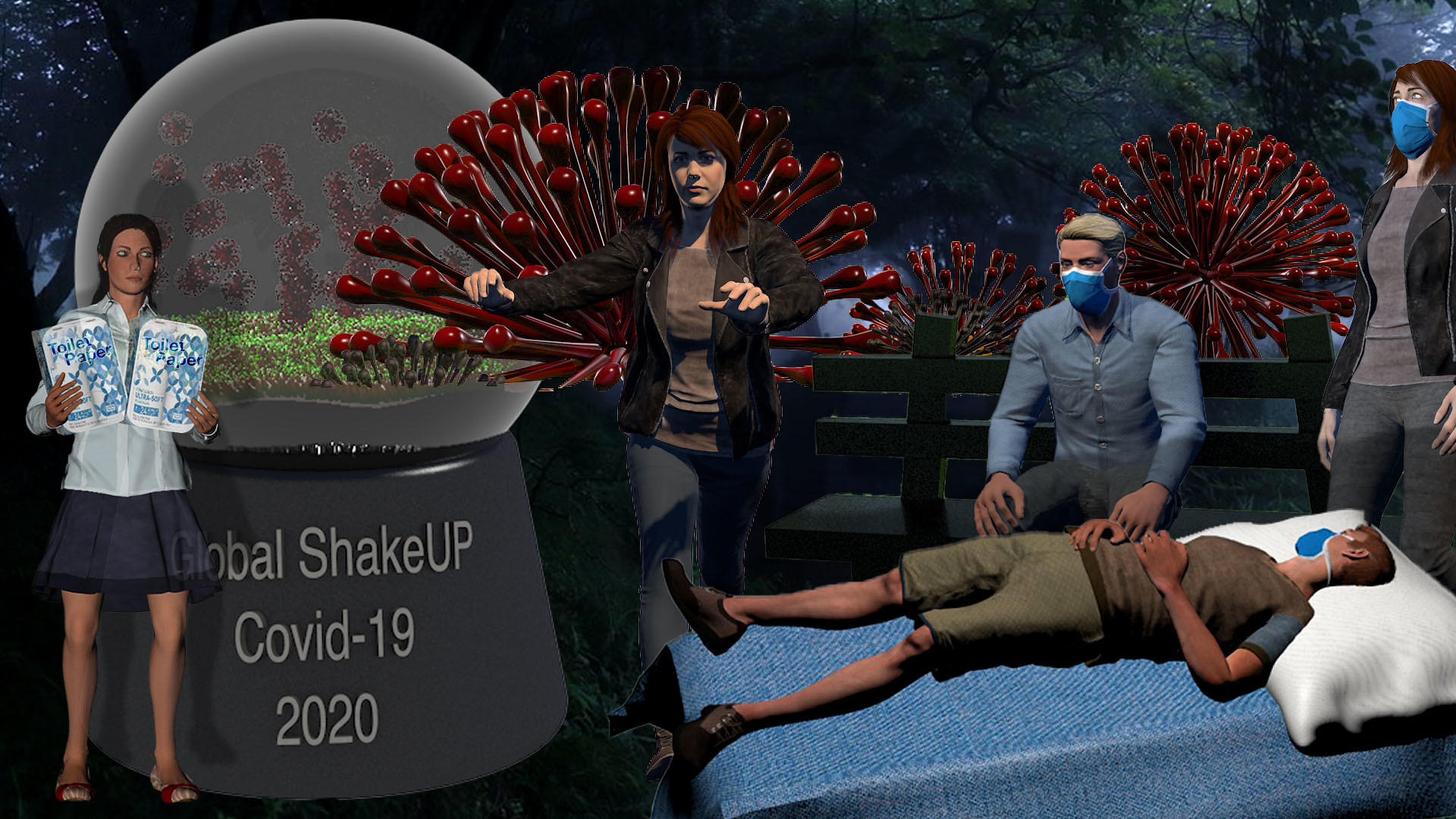 Leanne Read is currently working towards a Bachelor of Fine Arts with Honours degree at the University of Saskatchewan. She is a recipient of awards from the University including the Hantelman Humanities Undergraduate Scholarship and the Anna Bychinsky Award for Excellence in the Fine Arts or Music. Leanne has developed a passion for animation and strives to create an emotional experience with each new project.

“A Matter of Time” consists of three components: a digital animation, an augmented reality video, and an augmented reality 3D model. These three components are inspired by events that are happening in the world right now due to Covid-19. The animation questions and examines the inevitability of the current pandemic and what the world is experiencing because of it. It conveys what could be the resulting new normal and the impending fear of this cycle repeating again. The augmented reality video brings the action into the viewer’s space and gives a different perspective of the animation. The 3D model allows the viewer to complete the experience by getting an up close and personal view of the globe. Her intention is to have these viewed as a collection of experiences to give the viewer complete involvement in her work. 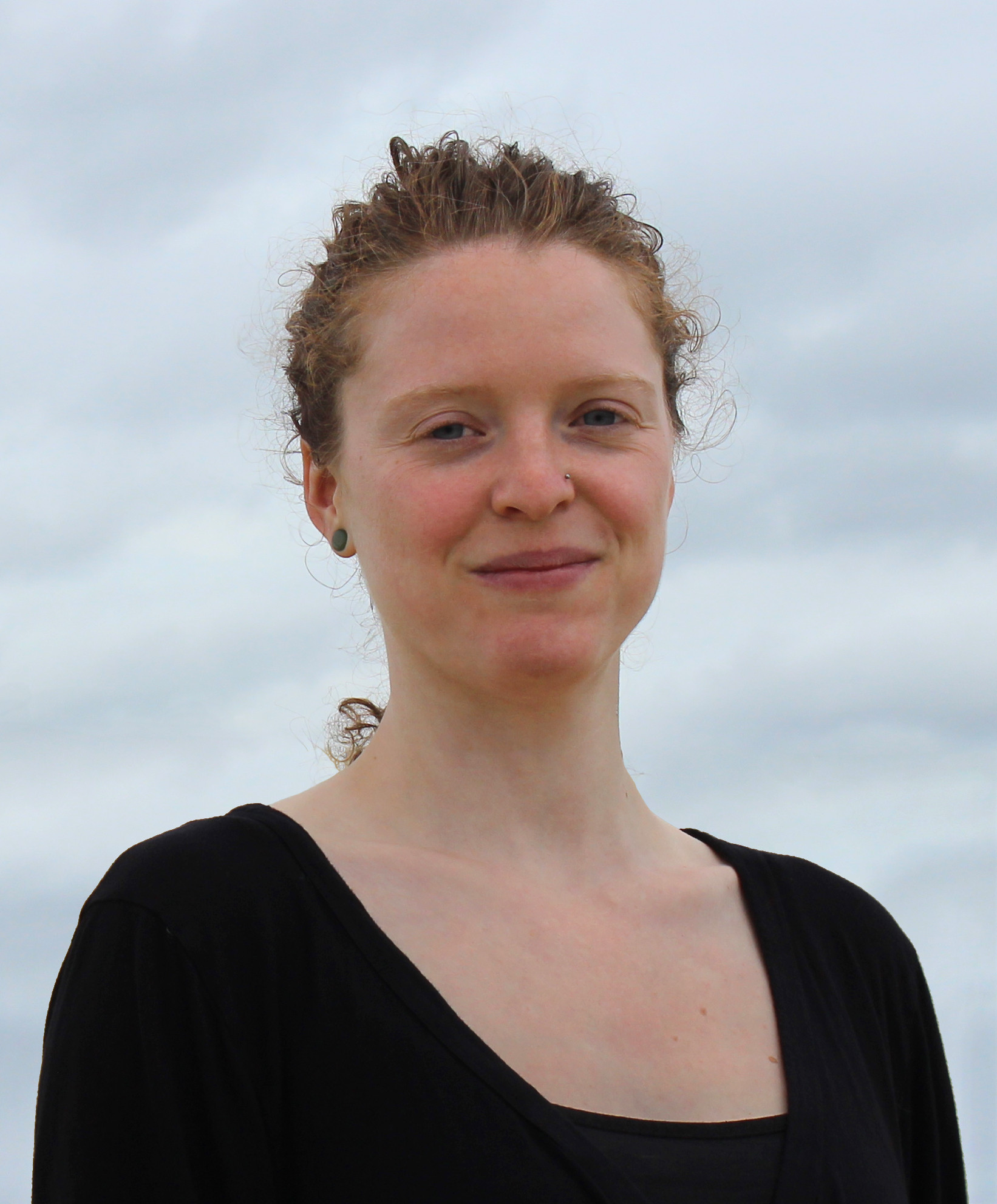 Caila Robson-Kullman is an artist using the media of photography, animation, printmaking, and painting. Born in Saskatoon, she is working toward a degree in Interactive Systems Design at the University of Saskatchewan with minors in Studio Arts, Psychology, and Digital Culture and New Media. Caila has received an award for a stop motion animated movie from the Flicks International Film Festival and shown artwork numerous times at the Mendel Art Gallery in school art exhibitions. In the spirit of adventure, Caila spent two years travelling and working in New Zealand and Australia. She undertook shorter trips to Japan, China and Mexico to broaden her cultural horizons. Camping, dancing, gardening and playing soccer are Caila’s interests in addition to making art. She has recently been employed with the Usask Art Galleries and Collections and with Shared Spaces. These opportunities have allowed her to meet many artists and explore the province’s artistic heritage and contemporary art scene. 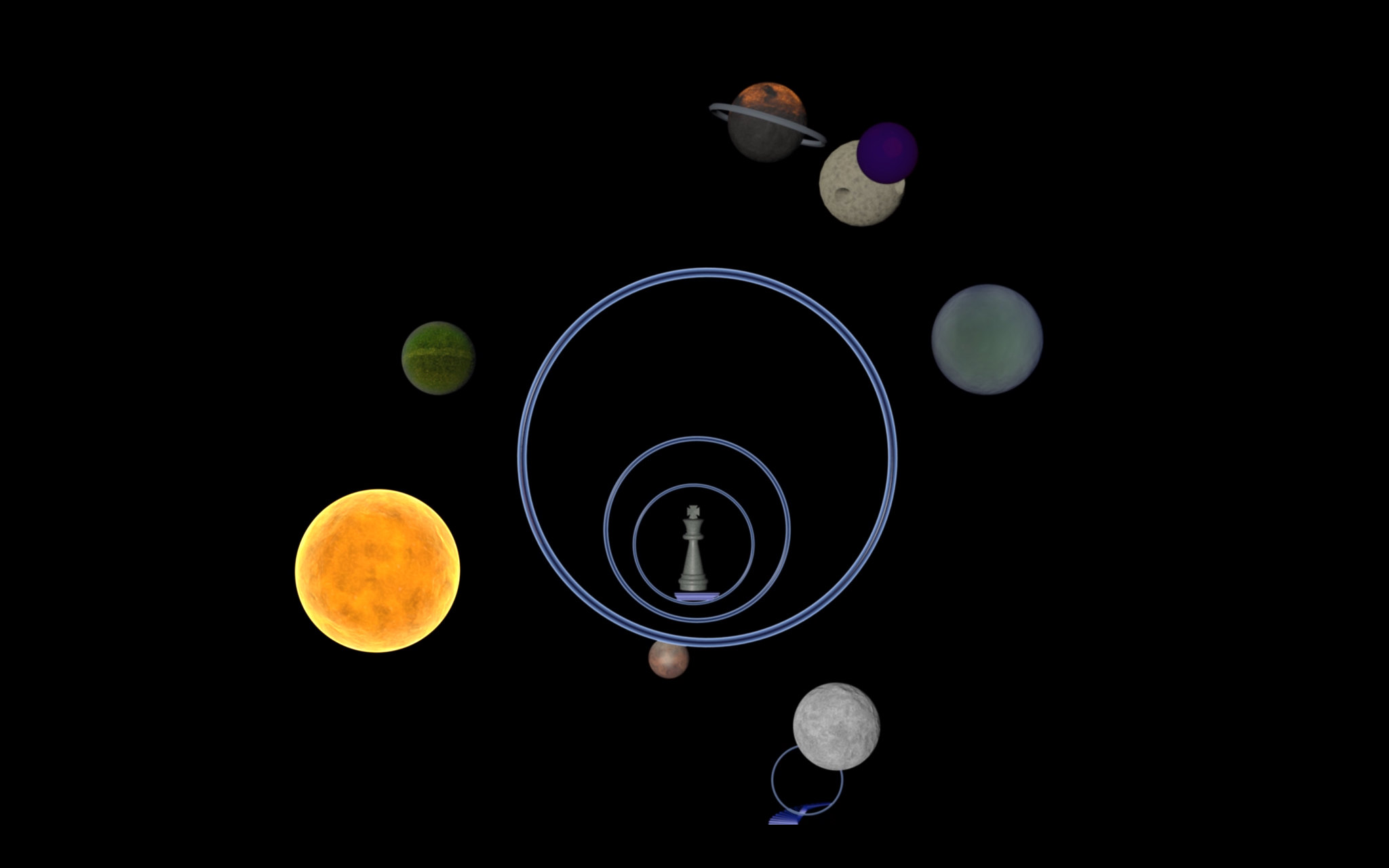 “Come Full Circle” is a multi media animation that flows from smoothly orbiting planets to an exploration of the repeating deeper cycles within our lives. Viewers will hear haunting crystalline music as they view cyclic scenes of rotating planets, blossoms opening and fading, a massive spinning spiral staircase and more. There is beauty in the seasonal changes that move incessantly through birth to death and back again. At the very start of the animation, the orbiting planetary system shows how small each organism is in the overall scheme of life and how permanent planets are when their time frame is vaster than humans can tangibly process. The overall setting is placed in the human mind where ideas can pop up and quickly be forgotten, sinking into darkness. In the presence of serene watchful eyes, diverse images of a chess king, a clock, rounded hovering arches and many more visions come and go. This video is an endless loop, finishing where it first started.